Here are some examples of paintball grenades. 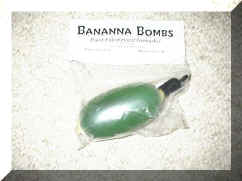 These paint grenades are filled with green or yellow paint and are activated by pulling the cap off and throwing at a hard surface. Paint disperses within a 20 to 30 foot radius. 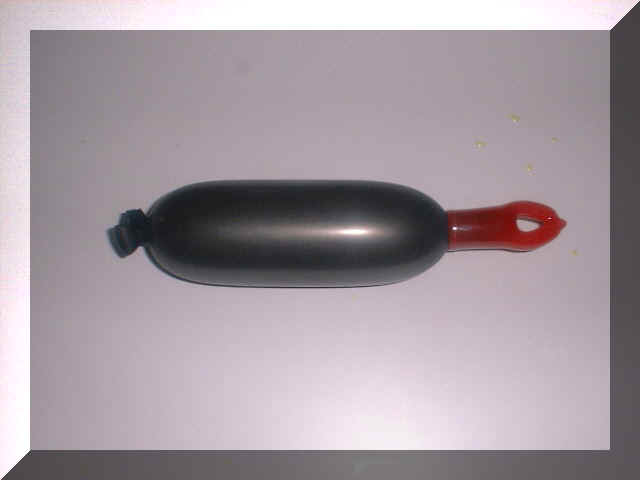 To use the assault grenade, simply pull the pin/cap assembly and throw. Will expel the paint solution on impact. 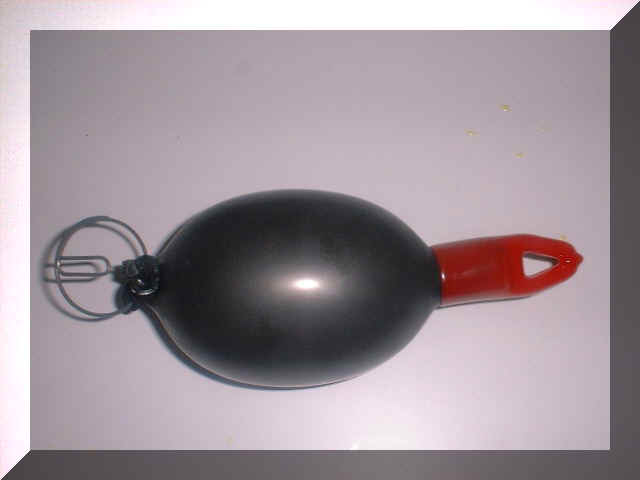 This paint bomb is similar to the assault grenade but is much larger and contains a greater quantity of paint.

The Tippman grenade works by forcing paint into a rubber hose under pressure. The ends of the tube are capped and a pin locked in place. Pulling the pin and throwing it at the target will cause the cap to pop off and squirt paint in about a 15 foot radius. The Tippman grenade is the most popular of all paint grenades. 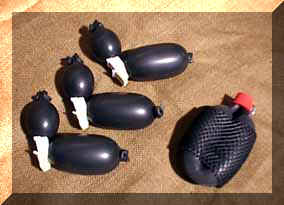 Using the same rubber surgical tubing used in their mortar round products, a paint solution is injected into the grenade on one end, the other end is filled with vinegar. When the two solutions are mixed when the grenade is armed, the simple chemical reaction will cause the grenade to expand and explode on impact with a loud “pop”. The grenade will expel the paint contents to surprising distances that rival any paint grenade on the market! For more info on Tippman Ordnance Products, visit their web page.
The Special Force Grenades are pictured next to a Tippman Squad buster for comparison.

NOTE: These grenades are no longer offered to the public from Tippmann Ordnance.

The M-69 Decoy grenade is a new concept from Alternative Paintball. Have you ever played a game of paintball and had a paint grenade thrown at you or into your bunker? Needless to say, it usually causes you to jump, scream, panic or at the very least, take your eyes off your target and stop shooting for a moment. The M69 Decoy grenade simply looks very much like the Strange Ordnance M69-A2 grenade, with it’s brown cardboard shell and metal pull pin top. It weighs just as much and is almost the exact size of its namesake, yet it contains no explosive or for matter of fact, no paint whatsoever. It’s sole purpose is to startle the enemy into thinking it may be a live grenade and flush them out of bunkers, from behind cover or to just grab there attention for a while. The M69 decoy is constructed of a pvc tube wrapped in simulated cardboard packaging just like the real M69. It has a metal simulated pull pin on the top and a sealed bottom. The letters “M-69” are stenciled on 2 sides, and the whole device is covered with a water resistant plastic covering for protection. In addition, the inside of the “grenade” has several metal rings inside that causes it to tick and rattle as it is thrown and rolling on the ground, drawing attention to itself. Next game, yell grenade and throw this at your opponent. It’s at least good for a laugh or even a conversation piece!

The Decoy grenade is not currently available to order.

Try Major Paintballs newest kid on the block, the G-4 paint grenade. At just under Five dollars per grenade, you will be able to douse your opponent head to toe with the best performing paint grenade on the market and still have money left for paintballs. Top Rated by Alternative Paintball, though currently out of stock.

Alternative Paintball is your home for all your paintball needs.