Paintball Assault Vehicles are mobile firing platforms designed from actual vehicles, golf carts, ATV’s, Quads, boats, helicopters or any other suitable platform at which to build your P.A.V.  They usually consist of “armor” to protect the occupants and some type of weapon to fire at opponents.  The “weapon” usually consist of gun ports cut into the sides of the vehicle, a cannon or a gun mount with a gatling paintgun or automatic paintgun like the TS-1 select..  If you have pics of PAV’s, send us the image to post here. 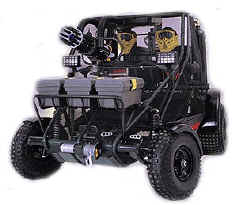 Above is the latest in awesome paintball assault vehicles.  This is Tippman Pneumatics Hellhound. This two man ATV has a 10 barrel high speed gatling gun that fires over 50 rounds per second with a 6000 round paintball capacity. The Hellhound also sports a rear mounted grenade launcher which launches Tippman Squadbuster grenades remotely from the passenger seat.  Other goodies onboard is a power winch, 15lb co2 tank, 5 storage lockers, headlamps and mounts for personal weapons of course the Tippman model 98!). This is by far the best useful paintball assault vehicles we have seen to date.  This item is NOT for sale, but I’m sure you’re going to see it at some of the bigger paintball events!   To see more pics of the Hellhound and its gadgets, go to the Tippman web site.

Not exactly a paintball assault vehicle, but definitely worth a mention here as to the ingenuity that can be used to convert everyday vehicles to P.A.V. use.

With the advent of Paintball Assault Vehicles showing up in ever increasing amounts at scenario and rec games, here are a few ideas to add to your next “Big Game”.

The M113 APC is used by many armies to provide transportation and support on the battlefield.  This concept can also be used on the paintball field.  The basic shape of the APC closely resembles a typical minivan.

Using an old minivan, which can be found fairly cheap (running or not), can be converted to an APC using some ingenuity, paint and plywood.  If it is not running, it can become a stationary object on your field.  With the addition of a paint cannon or gatling gun on a rooftop “turret”, it can be transformed to a fighting platform or base security.  A hole can be cut in the roof with a reciprocating saw to allow players to fire from relative safety within.  If the vehicle at your disposal is in running condition, it comes in handy if your field has paths and roads wide enough to traverse through.  A simple coat of flat olive drab green or camouflage paint can be added to the vehicles sides and windows to give the APC look. Turret gun mounts can have plywood, Plexiglas or aluminum “armor” added to protect gunners firing from the vehicle. 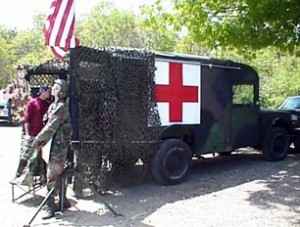 This is an actual military ambulance.  Pic was taken at Paintball L.I. big game ’99.  The owner was selling dog tags from the rear, but this vehicle would serve perfectly in a scenario game.  Maybe to even transport “wounded” players off the field. Note the mannequin standing at the rear.

Tanks in many forms are found on paintball fields around the world.   Here is an actual Ferret Scout car with a Angel Paintgun mounted on the turret roof. 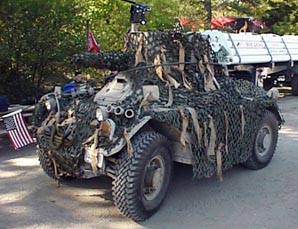 The Ferret was used in the annual big game in Paintball Long Islands March 16, 1999 game.  This game had lots of PAV’s including 3 tanks and a helicopter.

Here is another one of the tanks used at that game. 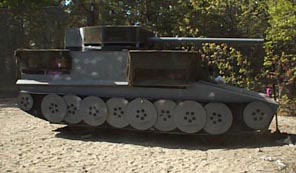 This one was HUGE and was built on a real vehicle chassis.  It housed a troop compartment that fit several men with a rear door exit, multiple view ports with camo netting for protection and gun ports.  The tank rumbled through the field blasting it’s built in stereo system with 4 external speakers that can be seen in the tanks front and rear viewlarge circular cut outs).  The wheels on the side are simulated, as is the cannon barrel.

Golf carts are a favorite for converting to the paintball assault vehicle role. As above, adding some  plywood and paint can do wonders. Jumbo, the replica WWII tank, is a paintball tank built on a golf cart platform.  Custom golf carts can be made to look like jeeps or even Hummers. 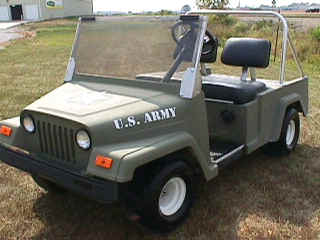 Here’s a perfect amphibious assault vehicle. They are made in several models. 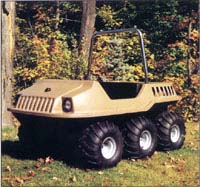 Two and four seater, or a truck version that seats two and has a large cargo area. They are even available with a full track like a real tank. Visit the Max ATV site for more info. The Max ATV’s go for $5000 or more new.

Another vehicle platform which can be used as a base for a paintball tank, or just for transportation on the field is the Mule (seen below). The mule is a gas powered workhorse that was used extensively in the Vietnam war. It is capable of carrying heavy loads over harsh terrain. Mules can be found for sale for up to $6000 for a well kept model.
ET Paintball has based their field tank, the “Badger” on a mule platform.

jeep.jpg (45073 bytes)Typical Jeeps can be converted to paintball assault vehicles. The 1950 and older models where much smaller than the jeeps of today and would fit nice on a paintball field. Attach a paintball gatling gun or automatic paintgun to the roll bar and go cruising. 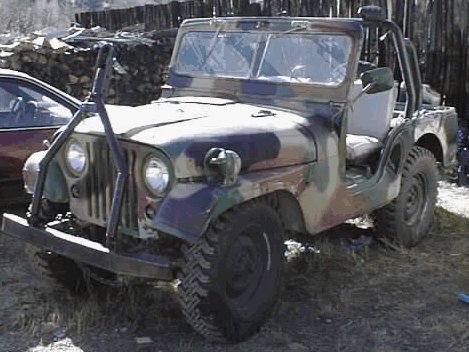 There are some fantastic paintball sites on the web, check out this tank and may others on Armor Fisted Paintball.

Another idea for a full water born assault is the use of a typical Jon boat. 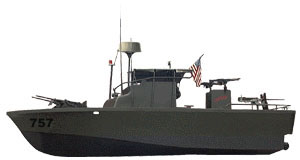 Add some plywood “armor” sheeting, some gun ports, cut 2 holes for ores or if you have a small outboard even better) and you have a mini river patrol boat! Lots of fields have small ponds, lakes and streams. Some fields have even adapted canoes with mounted paintguns.

Yes, that is right, airborn vehicles have been used in many paintball games in the past. Don’t expect a napalm attack, but helicopters are becoming common place during the larger big games. Fields sponsoring the games will sometimes rent a helicopter and place a sniper or two inside to shoot at the players below on the field. Another favorite is to drop grenades and smoke on the players. I have seen small two seater helicopters and even full blown Huey’s used in some games. It’s hard to run from a helicopter once he gets you in his sights. The only defense is found behind a BIG tree or thick bush and hope he doesn’t find you. 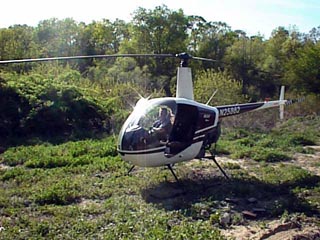 This is the copter that was actually used at the Paintball Long Island annual Big Game on March 16, 1999. It is a small 2 seater which housed a pilot and gunner who dropped water balloons grenades and shot at you from about 50 feet or so above the field. The pilot set the copter down right on a clearing next to the parking lot between games.

Alternative Paintball is your home for all your paintball needs.